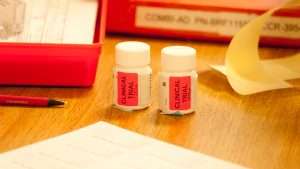 A new precision medicine targeting cancer’s ability to repair its DNA has shown promising results in the first clinical trial of the drug class.

The new study, designed to test the drug’s safety, found that half of patients given the new drug either alone or with platinum chemotherapy saw their cancer stop growing, and two patients saw their tumours shrink or disappear completely.

Damage to the DNA in cells is the root cause of cancer — but it is also a fundamental weakness in tumours, and cancer cells can be killed by further damaging their DNA or attacking their ability to repair it.

The new phase I trial tested the first in a new family of drugs blocking a key DNA repair protein called ATR. Phase I trials are designed to assess the safety of new treatments, and it’s unusual to see a clinical response at this stage.

A team at The Institute of Cancer Research, London, and The Royal Marsden NHS Foundation Trust, led a trial of the benefit of an ATR inhibitor called berzosertib either on its own or with chemotherapy in 40 patients with very advanced tumours, treated in hospitals around the world.

The researchers established the doses at which the drug was safe for use in further clinical trials, and found berzosertib on its own caused only mild side effects.

Surprisingly for a phase I trial, the researchers also found that berzosertib stopped tumours growing in over half of patients given the drug either on its own or with chemotherapy — 20 out of 38 patients whose treatment response could be measured.

The drug’s benefit in blocking DNA repair was even more marked in patients also given chemotherapy, which works by causing DNA damage. In these patients, 15 of 21, or 71 per cent saw their disease stabilise — suggesting that chemotherapy boosted sensitivity to berzosertib.

One patient with advanced bowel cancer whose tumour contained faults in key DNA repair genes including CHEK1 and ARID1A responded remarkably well to berzosertib on its own, seeing his tumours disappear and staying cancer free for more than two years.

Another woman with advanced ovarian cancer whose disease had come back after treatment with a drug blocking PARP, another key DNA repair protein, received the combination treatment and saw her tumours shrink.

This patient’s response suggests that berzosertib could be explored as a strategy to overcome resistance to the PARP inhibitor family of targeted treatments.

The drug is now moving forward in further trials, and the hope is that it could be developed into a new targeted treatment for patients, and help overcome resistance to other precision medicines such as PARP inhibitors that target DNA repair.

The new results are published in the Journal of Clinical Oncology today (Monday), and the trial was funded by Merck KGaA, Darmstadt, Germany, the manufacturer of the drug.

Drug resistance — as cancers evolve in response to treatment — is one of the biggest challenges facing cancer research and treatment today. The Institute of Cancer Research (ICR), a charity and research institute, will be focusing on how to overcome cancer evolution and drug resistance in its new Centre for Cancer Drug Discovery, for which it still needs to raise the final £2 million.

“Our new clinical trial is the first to test the safety of a brand new family of targeted cancer drugs in people, and it’s encouraging to see some clinical responses even in at this early stage. Now, we and others are planning further clinical trials of berzosertib and other drugs blocking the ATR protein.

“In future, this new class of ATR inhibiting drugs could boost the effect of treatments like chemotherapy that target cancer DNA, expand our range of treatment options and overcome resistance to other targeted treatments.

“Targeting a cancer’s ability to repair its DNA is a fundamentally important avenue of cancer research which has delivered some of the most important advances against the disease in recent years.

“It’s exciting to see the first clinical trial of a drug targeting a key player in the DNA repair process have such promising results, and I look forward to the results of further studies testing the benefit of this new family of targeted treatments.

“I’m keen to explore the potential for these ATR inhibitors to overcome resistance to other targeted drugs and to form effective treatment combinations. That’s exactly the kind of approach we will be taking in our new Centre for Cancer Drug Discovery as we look to block off cancer’s escape routes by creating a new generation of anti-evolution treatments.”